Here on 13th August, 2016 we provide you Health Department KPK Jobs 13 August 2016 Latest Vacancies in Peshawar. Government of Khyber Pakhtunkhwa, Health Department has started new project named as (Social Health Protection Initiative for Khyber Pakhtunkhwa” Phase-II for which it announced earlier latest jobs through NTS on 12th August, 2016 in which it will recruit highly qualified candidates but today it has announced job opportunities for those who are not well educated and the vacant positions are (Driver, Naib Qasid and Chowkidar). The official authority reserves the right to increase / decrease the number of positions and suspend the whole process. Recruitment against these positions will be on contract basis but it is further extendable on satisfactory performance of individual. Candidates having valid domicile of any district can apply but they should have following eligibilities mentioned in the following image such as Matriculation degree is required for all positions but for Sr. No. 1 LTV driving license with 5 years experience of driving is compulsory and age for all positions should be at least 45 years. So, if you possess relevant qualification then you are welcome to apply as per the following how to apply procedure given below. 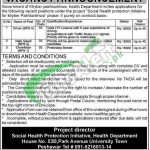