NTS Jobs in District & Session Court Rawalpindi for Stenographer, Computer Operator. A well reputed department invites applications from the interested candidates fulfilling the following conditions for recruitment against the following posts in office the District & Sessions Judge, Rawalpindi such as (Stenographer and Computer Operator). Applicants must possess qualification minimum graduation and maximum experience in the relevant field. Appointment of the above mentioned vacant positions will be held on contract basis and it is extendable on satisfactory performance. It is good opportunity for all those who wanted to have job in such type government department.

All the candidates are advised to send their applications along with attested copies of all relevant documents such as educational certificate, diplomas, character certificate, CNIC, Domicile and recent passport size photographs on the following address given below, before last date 25th February, 2015.  Applicants need to mention the position applied for on the envelope.

NTS will Recruit the following positions now and last date is extended now. 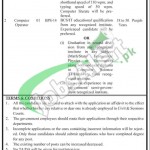