Here at this page you’ll have Directorate of Transport and Mass Transit KPK Jobs 2016 Career Opportunities. Jobs in Directorate of Transport and Mass Transit KPK are available and it is looking to recruit following staff for one of its ongoing project named as “Strengthening of VETS Peshawar & Replication of VETS in DI Khan, Mardan and Abbottabad and for this purpose it invites applications from highly educated, very experienced, hardworking and well disciplined candidates against the following positions such as (Technical Helper, Driver and Naib Qasid). Appointment of above mentioned positions will be done on purely contract basis and duration of contract is extendable on satisfactory performance till life of project. Candidates wanted to apply for these jobs are suggested to compare themselves with the eligibilities mentioned in the following image such as for Sr. No 1 & 2 Matriculation is required and for other position literate person can apply. So, for interested candidates who fulfill all above mentioned eligibilities are suggested to read the following how to apply procedure given in the next heading. 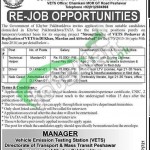