Here at this page we’ll discuss about Deputy Commissioner Office Battagram Computer Operator Jobs 2015. Jobs in the office of Deputy Commissioner Battagram are available and it is looking to recruit following positions for which it invites application from the residents of Battagram who are well educated, skilled, hardworking and well disciplined against the following positions such as (Computer Operator and Driver), there are total 08 positions are available for the post of Computer Operator and one position is available for the post of Driver. Candidates having age between 18 to 32 years are eligible to apply but they should possess relevant qualification such as for the post of Computer Operator candidate should have BCS / BIT from a recognized university. Those candidates who are simple graduate pass should have one year diploma in IT from a recognized board of technical education. For the post of Driver candidate should be literate and have LTV driving License issued y the authority. So, only suitable candidates should apply as per the following procedure which is given in the following heading. 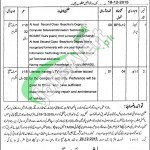