Here i am in nexus with all the job seekers via this page to advertise a job from CMH Mangla Jobs May 2016 For Naib Qasid Test & Interview Schedule. The CMH Mangla is lookign to hire the very and quite simple persons and applicants for the simple vacancies which includes Naib Qasid and Sanitary Worker are the vacant situations which needs to be filled by the willing applicants who should Primary pass and literate persons are required to be appointed over there but they must belong and also possess the domicile of District Jhelum are eligible to apply. Age limit should be 18-25 years and preference will be given to the experienced applicants. The applicants must be well aware of their work according to job. SO, its the great chance to be availed by the literate and primary pass applicants who are still unemployed and are searching the job according to their qualification so tap to this one if you belong to Jhelum. Now, let’s move towards its applying criteria. 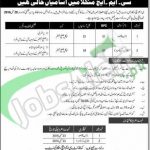