Here in the following i am going to throw light on a recent job offer from Army Medical Corps Rawalpindi Jobs 2016 For Civilian Medical Officer Eligibility Criteria. The Pakistan Army which is the most desirous Defence Department of Pakistan in which most of the applicants required to get employed so similarly the applications are being offered from the Army Medical Corps Rawalpindi is inviting the energetic, dynamic, well disciplined and retired Colonel/Lieutenant Colonel/ Major & Captain Officers are required to be recruited for the post of Chief Medical Officer is the situations which is lying vacant and needs to be filled by the eligible and suitable applicants. The selected doctors will be hired in Military Hospitals as General Practitioners. The eligibility criteria is now left to be discussed as for this post the applicants should possess the MBBS qualification and the retired General duty Medical Officers are eligible to apply for this post. Both male and females can apply equally. Age limit should be 59 years till 1st January 2017. The salary package will be equivalent the the Colonel/Lieutenant Colonel/ Major. Appointment will be done on contract basis for the duration of 3 years. So, these all are the full and final details now its time to move on towards its applying criteria below. 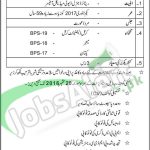