Here you’ll have Anti Terrorism Court Lahore Stenographer Jobs 2016 Test / Interview Date. Jobs in Lahore Anti Terrorism Court Lahore are available and it is invites applications from the well educated, experienced, hardworking and well disciplined candidates for the following position of Accountant. Appointment of above mentioned position will be done on purely contract basis and duration of contract is extendable on satisfactory performance. Candidates willing to apply should have Punjab domicile and relevant qualification and age as per the following eligibility criteria mentioned in the following image and according to the criteria candidates should be B.Com / BA and have a speed of 50 words per minute in English Typing while 100 words per minute in English Shorthand. It is good opportunity for those who are well educated and looking to have job in such type of reputed department in Lahore. So, only eligible candidates should apply as per the following how to apply procedure. 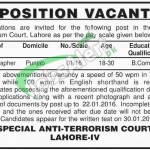