Here we are going to share an exciting career offer for minimum qualification holders from Anti Terrorism Court Lahore Jobs April 2016 For Sweeper Under Matric. The Anti Terrorism Court No#4 in Lahore is in search of Sweeper who should be having the qualification under Matric and is having its field work expertise in bets way will be preferred for this job. The age limit should be 18-45 years. The domicile holders of Lahore, Kasur, Shiekhupura, Nankana Sahib and Shiekhupura are required to apply for this vacant situations. So its the best opportunity especially on behalf of Matric holders and those who are interested and jobless still meet the said criteria so don’t wonder and think more but come forward and apply and get rids of evil of unemployment. So candidates don’t be hesitate if your can take over this job meticulously so have a look read all instructions and than tap to apply. Now let’s discuss its applying criteria.

So for those candidates who possess such amenities and are at sixes and sevens so they don’t need to be but apply with full confidence who knows the work of sweeper and are having the field practice so they must come forward and apply. For getting latest job updates you have to be in touch with our website. 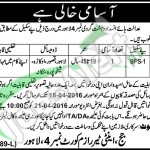