Here at this page we’ll provide you WAPDA NPGCL Jobs October 2015 Interview Dates Latest Advertisement. Jobs in NPGCL Northern Power Company Limited, GHC Genco Holding Company Limited are available and this company is looking to recruit following staff for Nandipur project, Gujranwala and it is seeking for highly educated, very experienced, hardworking and well disciplined candidates for the following positions such as (Operator, Attendant and Chemical Attendant). Appointment of above mentioned positions will be held on contract basis initially for 06 Months which is extendable if required, not liable to be converted into regular cadre. Candidates willing to apply should possess qualification and experience according to the criteria mentioned in the image posted below. It is good opportunity for all those candidates who are looking to have job in any department working under WAPDA, so take advantage from this opportunity and apply as per the following description given in the following heading. 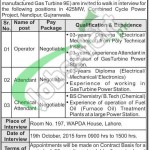