Today in the following you will be having the latest job offer from Wah Industries Limited Wah Cantt Jobs 2016 For Asstt Manager Accounts. For all those applicants who are willing to work in the Wah Clothing Industries (Pvt) Limited which is the subsidiary of Wah Industries Limited which is making the bullet proof jackets, PLCE items, uniforms and under garments is currently looking to recruit the energetic, dynamic, well disciplined, caliber, and capable applicants are needed to maintain and develop the sales and can also raise the accounting system are needed to fill the following vacant situations which includes Assistant Manager Accounts, Assistant Manager Marketing & Sales and Senior Assistant Accounts are the posts which needs to be filled by the applicants with overall qualification of ACMA, CA, ACCA, M.com, M.A, MBA, B.com, MS.c along with relevant several years expertise are required to apply. Maximum age limit should not exceed than 35 years. Appointment will be made on contract basis for the period of one year which can be extended further. So, let’s have a look now on its applying criteria below.

How to Apply for Wah Industries Limited Wah Cantt Jobs: 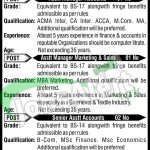