You are looking for Sailor jobs on our site and here is the 5 results found of Sailor, and find more jobs in Pakistan with best search on our website. 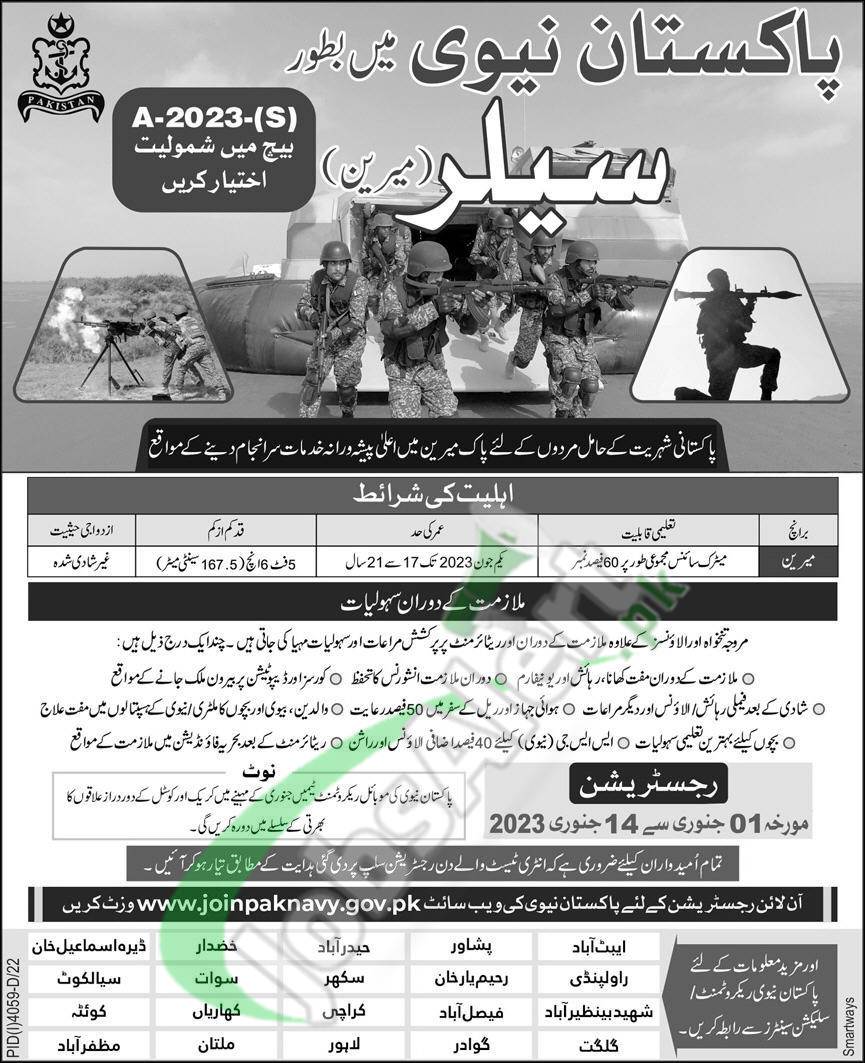 Get career offers in Join Pakistan Navy as Sailor (S) Batch A-2023 Marine Branch | www.joinpaknavy.gov.pk. Usually, in Pakistan Matric pass individuals don't have a good opportunity to secure their future. But Pakistan Navy is the place where they can join Pak Navy As Sailor just after Matriculation because their requirements are quite affordable for the Matric pass applicants. All they have to do is just compare themselves with the requirements rust towards the Navy Selection and Recruitment Center or register online at www.joinpaknavy.gov.pk and pave their way to a successful future. 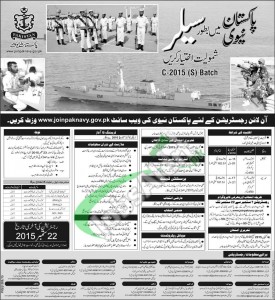 Here is good news for the Pakistani Nationals that Join Pak Navy as Sailor 2015 Online Registration www.joinpaknavy.gov.pk are available. To have job in any defence force is everyone’s dream in Pakistan because but the basic problem which our young citizens face that is that they don’t know when these defence forces announces the job opportunities. Pakistan Navy announced jobs for the Pakistani Nationals almost in every month and currently it has announced jobs for which it requires Matric pas candidates having valid CNIC and Domicile of any domicile of Pakistan. Complete eligibility criteria is mentioned below is mentioned below in which you’ll have information about the branches in which you can apply and also required qualification with age and height. So, viewers it is a golden opportunity for you to become part of Pakistan Navy because after successful selection they’ll offer you handsome salary, other allowances and after retirement they’ll give you retirement allowances too. So, by working in Pak Navy you’ll have benefits during employment and also after retirement. So, in the following you’ll have important information about how you can apply for the job in Pakistan Navy. 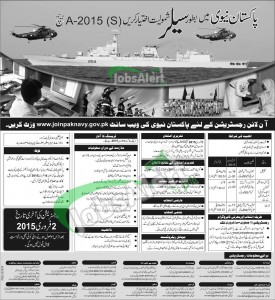 Here is good news for the citizens of Pakistan that jobs are vacant in Pakistan Navy. Join Pakistan Navy as a Sailor Online Registration Batch A-2015 (S). Pakistan Navy announced jobs opportunities almost after every month and now it has announced jobs for the citizens of Pakistan to join Pakistan as Sailor. Both male and female candidates from every province of Pakistan having valid CNIC and Domicile are eligible to apply. Female candidates can only apply for the Medical Technician only. Applicants should read eligibility criteria carefully before apply for the vacant position. It is golden opportunity for all those who are matric pass looking for a Government Jobs in such type of well reputed defence force. Applicants should follow the selection procedure for to have successful selection in Pakistan Army. 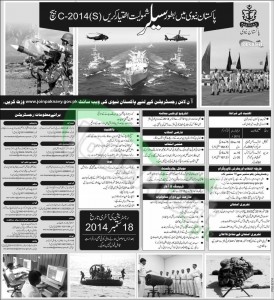 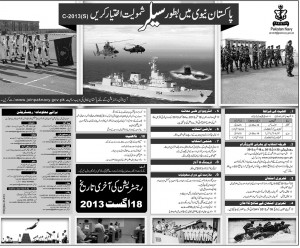 Jobs are required in Pakistan Navy, interested candidate participate in Pakistan Navy as SAILOR. Registration will be held from 22nd July to 18th August 2013. All the interested candidates can get more information from the official website of navy given below. When you can come for entry test then you bring Rs.50 postal order from Director reqruitemnt Naval Headquarter Islamabad. The Registration of last date is 18th August 2013. All details are provide for you in this brochure and you can get all information from here. Please keep visit on this page to get latest updates.

New vacancies for Sailor jobs 2023 and Sailor openings jobs in 2024 are listed online with new Sailor jobs posted daily. Previous Sailor jobs 2022 can also be applied for online. Make money from home or the office by choosing the right Sailor job for your qualification and experience. By applying to today's jobs at Sailor Punjab, Sindh, KPK, Balochistan, Gilgit Baltistan, AJK, you join a growing team.