Here in the following i am going to enlist the latest job offer from Punjab Police Mounted Squad Jobs 2016 For Constable Eligibility Criteria. For all those applicants who are willing to fill the posts in Punjab Police Mounted Squad is currently seeking and looking to hire the applicants for the post of Constable BPS-05 is vacant to be filled right at this given date. So, as i have disclosed the vacancy before you now its time to have a look on its applying criteria as for this post the applicants should bears the Matric qualification along with relevant physical education along with height of “5 Feet 7 Inches” and Chest size should be “33 by 34 1/2″attaining the age limit of 18 to 25 years are eligible to apply and all those candidates who possess the domicile of Punjab districts are welcome to apply for this post and the names of such posts are mentioned in the advertisement image a some are here Lahore, Shiekhupura. Applicants have to go through the running test in which they have to cover the distance of 1.6km in 7 minutes and the applicants should be well versed in how know about the Horses take care will be added as a responsibility for this post. Now, let’s throw light on its applying criteria below. 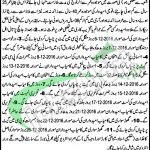