Good deeds should be done with intention, not for attention.

For all those applicants who are looking for Population Department jobs so here it is from Population Welfare Department Narowal Jobs 2016 Test & Interview Date. One of the well known department “Population Welfare Department” which is working under the Government being a Govt Department it is responsible for educate the population about the birth issues and population control issues and all matters related to them. It provides the job from Graduation to Matric level and those of literate and Middle, Primary pass applicants are also eligible to get employed here for low scale posts. So, as the advertisement is about the Population Welfare Department Narowal District so its is regulated under the kind control of Govt of Punjab is inviting the applicants for under the Project Management Unit for the Extension in Family Welfare Centre and to introduce the Community Based Family Planning (2014-18) ample of the posts for which the eligible, adroit, caliber, capable and well known applicants are required to apply for the post of Family Welfare Assistant (Female), Family Welfare Assistant (Male), Female (Helper) and Chowkidar are required to fill out these posts on contract basis. Quota is also reserved for In service employees as 10 to 20% and 3% for Disable applicants and those of 5% for Minorities. Seats are available in Union Councils for these post as one seat for each post. Now, have a look on its applying and eligibility conditions below.

Eligibility criteria which is required for these posts includes Matric, Middle, Literate and with the age limit of 18-25 and 20-35 years is required with 5 years age relation to the males and 8 years will be given to the females.

How to Apply for Population Welfare Department Narowal Jobs: 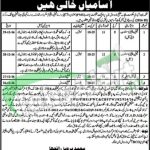