Here at this page we’ll discuss about Population Welfare Department Karak Family Welfare Assistant Jobs 2015. Jobs in Population Welfare Department KPK are available and this government department is looking to recruit following position for Karak district and due to this is seeking for educated, very experienced, hardworking and well disciplined candidates for the following position such as (Family Welfare Assistant (Male)). Appointment of above mentioned positions will be held on purely contract basis which can be extendable on satisfactory performance. Candidates willing to apply should compare themselves with the eligibilities mentioned in the following image and according to the criteria candidates should have minimum Matric degree and age of candidate should be between 18 to 30 years. For eligible candidates we have provided how to apply procedure in the following heading. 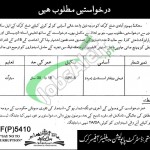