Get the recruitment opportunity from Population Welfare Department Jhelum Jobs 2017 For Males Latest Advertisement. Applications are being offered from Population Welfare Department Jhelum For Project Management Unit for Extension for Family Welfare Centres (2014-2018) are required to fill the following posts which are named as (Family Welfare Assistant (Male) is the post which needs to be filled by the applicants as soon as possible. The appointment will be done on contract basis which will remain continue till 2018 according to the policy of Govt of Punjab on merit basis. All of these posts will be filled in different and several Union Councils which can be seen from the advertisement image. For this post Matric with the 2nd division is required with age limit of 18-25 years. Only males are liable to apply for this post. Now, I will let you know about its further details below.

Population Welfare Department is the Govt body which is working under the Govt of Punjab which is working for to aware the peoples about the planning and family growth affairs and the development of births and its control are the prime and main objective of this department. Being a Govt body it offers Govt jobs of different levels.

How to Apply for Population Welfare Department Jhelum Jobs: 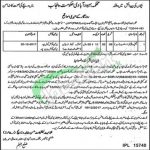