Here in the following, you will get Population Welfare Department Kohistan Lower Jobs 2022 Latest Advertisement. Applications are being offered from Population Welfare Department Kohistan Lower is seeking to appoint the well disciplined, caliber and adroit applicants are required to apply for the following government jobs given below.

Population Welfare Department KPK Jobs which are named as (Aya/Helper, Naib Qasid) are the current positions which need to be filled by those applicants who possess the Matric / Middle qualification from the well-recognized board. Age limit should be 18-40 years and age relaxation will be given to the applicants as per Govt of KPK.

So, all those applicants who possess the relevant expertise and education matching the said criteria are welcome to apply. Now, I will let you know about its further details below.

Population Welfare Department is the Govt body which is working under the Govt of Punjab which is working for to aware the peoples about the planning and family growth affairs and the development of births and its control are the prime and main objective of this department. Being a Govt body it offers Govt jobs of different levels.

How to Apply for Population Welfare Department Kohistan Lower Jobs: 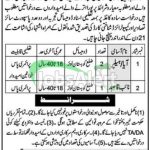