Today at this job platform we are going to offer a news job from Pakistan Army ISPR Rawalpindi Jobs April 2016 For Civilian Officers. The Inter Service Public Relation is inviting the well educated and well equipped officers who are retired/released and Majors in this field are required once again as re- employment as Civilian Gazetted Officers at GHQ/Lower fmn of Army are required to hold this job. So, those retired and released officers who have retired from Army are invited to apply for re-employment as Civilian Officers once again. The qualification of TE/BS.c, MS.c, M.A, MS.c, PSC, ICS and equivalent degree holders are required who have served as Retired Major (Sign), Retired Major (ASC), Retired Major (Arty, AAD, Engrs) and Retired Major (Sign/EME). Total 10 number of vacancies are available to apply. The applicants will be appointed for 3 years with no further extension. So, now let’s tap towards its applying criteria and further details.

Retirement Details: Retired Majors/Released who has attained the age limit are invited to apply.

Age Limit: Age of the applicant must be 52 years.

Duration of Retirement: Those applicants who have been retired since last two years are eligible to apply.

Place of Posting: The officers will have to work at any place in Pakistan. 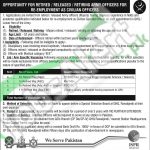