Here at this page you’ll have OPF Islamabad Jobs October 2015 Application Form Overseas Pakistani Foundation. Jobs in OPF Overseas Pakistani Foundation are available and it is seeking for highly educated, very experienced, hardworking and well disciplined candidates for the following positions such as (Chief Financial Officer, Company Secretary, Chief Internal Auditor, Principal Engineer (Civil) and Principal Engineer (Civil)). Appointments of above mentioned positions will be held on purely contract basis initially for two to three years which is extendable on satisfactory performance. Candidates willing to apply should possess qualification and experience according to the criteria mentioned in the following image posted below. So, only suitable candidates should submit their applications fulfilling requirements are suggested to apply as per the following how to apply procedure. 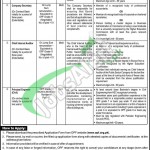