Get NLC Bahawalpur Jobs 2017 For BPS-16 To BPS-02 Test & Interview Date. Applications are being offered from National Logistic Cell has recently advertised a new vacancy for its Headquarter Tolling Bahawalpur, requires the services of eligible, caliber and well disciplined applicants for Sindh Toll Plaza Staff services are required to fill the following posts which are named as (Toll Plaza Manager, Assistant Toll Plaza Manager, Shift Incharge, Driver, Security Guard, TBO, CCTV Camera Operator, Sweeper and Cook) are the current posts which needs to be filled with Intermediate, Matric and Middle qualification and those of relevant expertise are needed to apply for such posts. Applicants will be given attractive salary packages and fringe benefits as single accommodation and eating facility as well.  Applicants who got retirement from Armed Forces being a Major, Lieutenant, Honorary Lieutenant, Honorary Captain, Lance Naik and Constable are required to apply for such posts. Age limits are different as 55, 50, 45, 40 and 18-35 year’s is required. Now, I will let you know about it’s further details below.

NLC is abbreviated as National Logistic Cell which is the Federal Govt and is the state owned organization which is indulged in taking active roles in managing and developing atomic bomb projects and much more tasks are also included to be done through this cell. Being a Federal Govt body it offers Govt jobs.

How to Apply for NLC Bahawalpur Jobs: 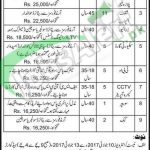