Here at this page we provide you Ministry of Religious Affairs Jobs 2015 in Directorate of Hajj Multan. Jobs in Ministry of Religious Affairs Government of Pakistan are available and it is looking to hire following staff for directorate of Hajj Multan Office and due to this it is seeking for highly qualified, experienced, hardworking and well disciplined Pakistani Nationals for the following positions such as (UDC, LDC, Driver, Naib Qasid, Electrician, Sanitary Worker and Labour). Appointment will be done on contract basis for Hajj Season 2015 and duration will be only 30 days which may further increases on satisfactory performance. Applicants willing to apply for the above mentioned positions should compare themselves with the eligibility criteria mentioned in the image posted below and only eligible candidates should step forward and apply confidently and make your future successful by having job in such type of well reputed Government Department. 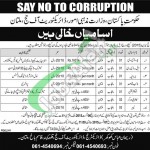