Get Katchi Abadi Department Sindh Jobs 2016 Apply online sindhrozgar.gos.pk which means in the following you’ll have jobs announced by the one of the government departments working under Sindh Government named as Sindh Katchi Abadi Authority which invites applications from the Sindh Domiciled candidates who possess relevant qualification and other skills against the vacant positions such as (Computer Operator and Sub Engineer). Appointment of these positions will be done on purely contract basis as per the recruitment policy of Government of Sindh and duration of contract is extendable on satisfactory performance of individual. Candidates willing to apply are suggested to first compare themselves with the criteria mentioned in the following image according to which for Sr. No. 1 Graduation degree in Computer Sciences with at least second division is required and for Sub Engineer DAE diploma holder with relevant experience are eligible to apply and for both positions age between 21 to 28 years. So, only eligible candidates should move forward towards how to apply procedure given in the following. 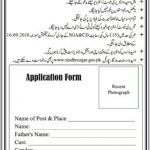