Jobs are vacant in Pakistan Army, Fixed Communication Signal Company, Peshawar, Nowshera and Kohat. Join Pakistan Army As Civilian 2015 Jobs Opportunities. Pakistan Army invites applications from the Pakistani Nationals to join Pakistan Army as civilian for the following vacant positions which are on contract basis and likely to be permanent on satisfactory performance. Vacant positions are (Telephone Supervisor, Technician, Telephone Operator, Draftsman, Lineman Supervisor, Lineman, Driver, Mess Waiter, Cook and etc). Applicants having Punjab, KPK and Balochistan Domicile and relevant qualification according to the criteria are eligible to apply. It is good opportunity for all those candidates desire to have job in such type of well reputed Army department.

Interested candidates should send their applications written on plain paper along with attested copies of all relevant documents such as educational certificate, experience certificate, CNIC, Domicile  and postal order of Rs. 250/- on the following address given below, before last date 20th February, 2015. Applicants should mention clearly the position applied for on the envelope.

Applications received incomplete or after last date will not be entertained. After verification of documents shortlisted candidates will be called for test / interview and no TA/DA will be admissible for appearing in test / interview. Applicants should bring original documents at the time of interview. Stay in touch with us and keep visiting our site JobsAlert.pk for further updates. 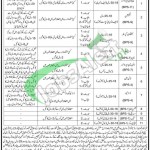