For the Pakistani Nationals we provide here Join Pak Army Civilian Jobs October 2015 CMH Nowshera. Jobs in CMH Combined Military Hospital Nowshera are available and it invites applications are invited from the highly educated, very experienced, hardworking and well disciplined candidates for the following positions such as (Database / System Administration Technician, Medical Assistant, Ward boy, Driver, Barbour, Cook). The above mentioned positions are on provincial quota such as it has announced jobs for Punjab, Sindh, Khyber Pakhtunkhwa, Azad Kashmir and Northern Area. Appointments of above mentioned positions will be held on purely contract basis which is extendable on satisfactory performance. Candidates willing to apply for these positions are suggested to compare themselves with eligibilities mentioned in the following image where you’ll have information about required qualification and experience is mentioned. For interested candidates we have provided how to apply procedure in the following heading so read it carefully. 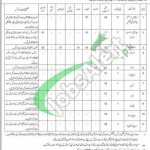