A well renowned Punjab Government Department offers Health Department Punjab Jobs 2015 Lahore, Rawalpindi, Faisalabad, Multan. Applications are invited from candidates having the following qualification for temporary posts such as (Hospital Monitoring & Evaluation Assistant) and vacant position is for different divisions of Punjab such as (Rawalpindi, Sargodha, Lahore, Faisalabad, Multan, Gujranwala, DG Khan and Bahawalpur). Appointments will be held on contract basis and it is extendable on satisfactory performance as per the policy of Government of Punjab. Applicants willing to apply should be retired Junior Commissioned Officer Chief Technician from Pakistan Army or other armed force. 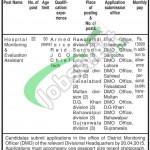