Here on 12th August, 2016 we provide you Fatima Jinnah College Chuna Mandi Lahore Jobs 2016 Latest Career Opportunities. Jobs in GFJC Government Fatima Jinnah College for Women Chuna Mandi Lahore are available and now this time it has announced latest jobs on contract basis against the Non Teaching Staff such as (Junior Clerk, Lecturer Assistant, Computer Lab. Incharge, Driver, Lab. Attendant, Naib Qasid, Bus Conductor, Chowkidar and Sweeper) for which it invites applications from the male / female Punjab Domiciled candidates possessing relevant qualification mentioned in the following image posted below such as for Sr. No. 1 and 3 Intermediate degree is required and for all other positions Matric / Middle pass candidates can apply. There are some other requirements mentioned in the following for every post which is also compulsory for everyone to fulfill them. So, viewers take advantage from this opportunity and apply as soon as possible because after final selection Salary will be offered according to the Rules and Regulations of Government Fatima Jinnah College for Women, Chuna Mandi, Lahore. So, now jump towards how to apply procedure which is given below. 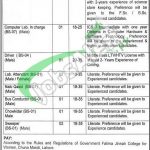