Jobs are vacant in City District Government, Lahore, and Government of Punab. City District Govt Schools & Offices Lahore Jobs 2015 Under Matric. City District Govt. Lahore is looking to hire staff equivalent to BPS-01 for every Government School and Offices in all over Lahore District. It is for all those who don’t have higher qualification but they still want to work in any Government department so take advantage from this opportunity to have job in such type Government Offices and Schools. Both Male and Female applicants having qualification under matric and Valid CNIC and domicile are welcome to apply. Appointment will be held on contract basis but it is extendable on satisfactory performance and mutual consent.

Applications written on plain paper along with attested copies of educational certificate, CNIC and domicile should reach on the relevant High School and Office of District Education Officer. Last date for submission of application is 24th January, 2015.

Applicants should mention clearly the position applied for on the envelope. Interviews for the vacant positions will be start from 31st January, 2015 according to the schedule mentioned below in the image. No TA / DA will be admissible for appearing interview. Stay in touch with us and keep visiting our site JobsAlert.pk for further updates. 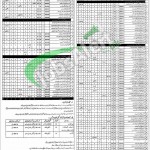