Government of Punjab Anti Terrorism Court Sahiwal Jobs 2016-2017 Latest Test / Interview Date is available below. Applications are invited from the interested Sahiwal Domiciled candidates who are well educated and skilled against the following positions such as (Accounts Clerk, Driver, Naib Qasid, Chowkidar and Sweeper). Test for Sr. No. 1 will be held in Commerce College, Sahiwal, for Sr. No. 2 test will be held in Police Line Sahiwal and for all other positions test will be held in the Office of Anti Terrorism Court Sahiwal and complete schedule for test can be examined from the following image posted below. All recruitment shall be done as per the recruitment Punjab Government policy 2004. 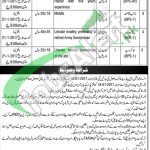