“our lord! Forgive me and my parrents, and (all) the believers on the day when the reckoning will be established – Quran 14:41”

Here is good news for the residents of Balochistan that Aghaz e Haqooq Balochistan GEPCO Jobs 2015 BTS Form & Roll Number Slips are available. Government of Pakistan has started Aghaz-e-Haqooq Balochistan package in which it has decided to provide job opportunities for the Balochistan domiciled candidates in different Federal Government Departments and due to this here are latest jobs for the residents of Balochistan in GEPCO Gujranwala Electric Power Company and due to this it invites applications from the highly qualified, experienced, determined and well disciplined candidates for the following positions and list is given below. Appointments of the positions will be done on contract basis, initially for one year which is extendable on satisfactory performance. Applicants willing to apply are advised to read the eligibility criteria carefully before apply for any vacant position. All positions are going to be recruit by BTS which is well reputed testing organization in Balochistan and every candidate has to follow the rules of BTS to have successful recruitment. 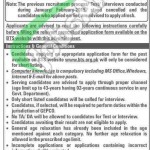 Application Form Will BE Available Soon