Newspapers are a chief source of providing national as well as international information of each and every current situation and happenings every day.

Newspapers are cheap source of getting information and are found everywhere city-wise and in all countries too and contains detailed information of each and every minute act and things, news reporters focus very little news and publish it in every newspaper within start of a new day the beginning of every person begins by reading the headlines of the day and what is going around the world. 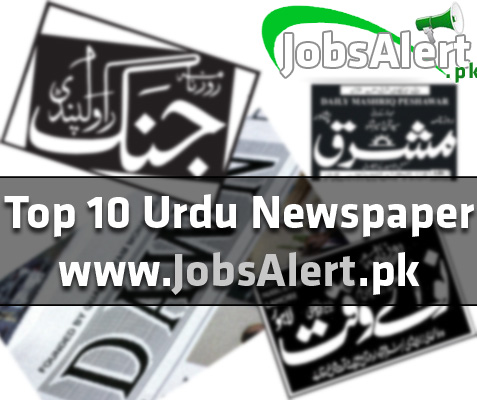 The Daily Jang newspaper was founded in 1939 by the Jang Group of newspapers and the name of its founder is Mr. Khalil ur, Rehman. The newspaper is in the Urdu language which is issued from Karachi, Lahore, Rawalpindi, Quetta, Multan, and London. Its daily circulation is of 800000 copies. Its Founder was Mir Khalil-ur-Rehman and now his younger son Mir Shakeel-ur-Rehman is continuing the publication of this paper and it is the largest Urdu newspaper in Pakistan. In Pakistan mostly people examine Jang Jobs because of an almost daily huge number of jobs announced in the Daily Jang newspaper.

Dawn newspaper is one of the most liked and most circulating newspapers of Urdu language in Pakistan which was founded by the creator of Pakistan Quaid-e- Azam Muhammad Ali Jinnah in 1941 at Dehli. It has a weekday circulation of over 138000. Hameed Haroon is the CEO of the Dawn group. The Current editor of Dawn is Abbas Nasir. In Dawn Jobs of both private and government sectors announced on almost every day and it provides a good quality image of the advertisement.

Jasarat newspaper is a daily newspaper in the Urdu language and was founded in 1970 and was published by Syed Zakir Ali. All over Pakistan it is circulated and is having its headquarter in Karachi, Islamabad, and Lahore. People from all over Pakistan follow Jasarat Jobs because of its good job opportunities are announced by the Private and Govt Sector.

This newspaper was founded on the 26th of September 2000 and was founded by Zia Shahid. This newspaper is daily sort of newspaper and is in the Urdu language also which is read by most of the Pakistani’s. It is published simultaneously from Islamabad, Karachi, Lahore, Peshawar, Multan, Hyderabad, Muzaffarabad and Sukkur. It claims to have a 30% circulation share. In Khabrain Jobs are available in the huge number of almost every city of Pakistan.

The Daily Express newspaper is one of the most circulated Urdu newspaper of Pakistan. It was founded on 3 September 1998. It was published by Century Publications, A Lakson Group Subsidiary. It is published simultaneously from Islamabad, Karachi, Lahore, Peshawar, Quetta, Multan, Faisalabad, Gujranwala, Sargodha, Rahim Yar Khan, and Sukkur. It Claims to have a 24% circulation share. It is a very important newspaper because in Express Jobs of all Government Departments announced on a daily basis.

Daily Aaj newspaper is an Urdu language newspaper and was founded in 1989 and its publishers are A.A.A Publications and the founder and owner of this newspaper are “A. W YOUSAF”. People also examine the Daily Aaj Jobs section because jobs of well-reputed Government Departments and Private firms published in it.

Waqt newspaper was launched in 2007 and was owned by Nawaiwaqt Newspaper Group. It’s in Urdu language and is a famous and readable newspaper all over Pakistan. In Waqt Newspaper Jobs of all government departments announced in a huge number of every scale.

Daily Mashriq Evening Special newspaper is a type of daily newspaper in the Urdu language which was founded in September 1983 and the owner of this newspaper is Mashriq Group of Newspapers. Syed Mumtaz Shah is currently its chief editor. It is currently published from Karachi, Hyderabad, and Quetta simultaneously. In Daily Mashriq Jobs of almost every reputed Government department of Pakistan published on a daily basis.

So these are the top ten and the most liked and full of very minute and little act information newspaper lists which are famous all around Pakistan.